Important Statement from AeroMexico Regarding B737-8← Back 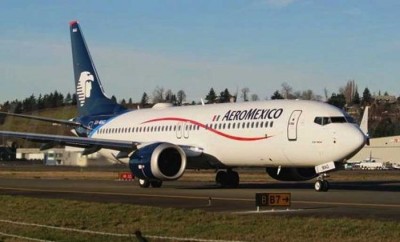 Important Statement from AeroMexico Regarding B737-8

Regarding the situation of the Boeing 737 MAX 8 aircraft and Ethiopian Airlines flight ET302, Aeromexico would like to inform that it is maintaining ongoing communication with the manufacturer and the corresponding aeronautical authorities.
The airline reiterates that it has full confidence in the safety of the fleet and that during the last year, it has operated the Boeing 737 MAX 8 aircraft in safe, reliable, and efficient conditions.
Nevertheless, Aeromexico has decided to temporarily suspend the operation of its 6 Boeing 737 MAX 8 aircraft until more thorough information on the investigation of the flight ET302 accident can be provided.
For Aeromexico, the safety of its operations and the peace of mind of its customers is the top priority.
The flights operated with these aircraft will be reassigned throughout the rest of the fleet.
Aeromexico will keep customers informed through its official channels: aeromexico.com, Call Center 1-800-237-6639, and through the Twitter account, @AeromexicoUSA ​

Due to adjustments to the itinerary by a reduction in the operating fleet, Aeromexico will make some temporary cancellations, for which the following protection policy is presented.
Applicable to passengers with Aeromexico, Aeromexico code and/or interline tickets with confirmed bookings.
The below program is valid from 11 March 2019*
​

All passengers that have tickets with at least one segment operated by Aeromexico, whose itinerary has been cancelled by the same airline, will be protected according to this policy, being entitled to one change per flight and passenger:

No charge for change of date or rate difference, as long as the same route and cabin is respected.

Tickets not used at this time will be valid for one year as of their issue dates.

The route change is allowed. In case there is a difference in the fare between the original ticket and the new ticket, the difference must be paid at the time of making the change.

**If the rescheduled trip occurs after the permitted travel period and the change is made on the allowed dates of application*, fees will be waived for changes, however, a difference in fare may apply.

If the passenger decides not to use the service, the ticket has a valid year from the date of issue.

All bookings under this flexibility policy must include the following OSI:
OSE AM FLOTA 2019